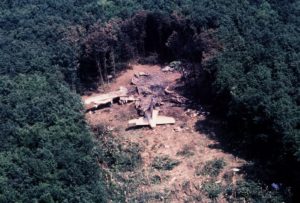 In this picture, we can see the wreckage of a plane in the middle of a forest. By the look of it, we can guess that this is an Air France A320, hence giving us enough clues to figure out what happened. This picture was indeed shot right after a crash that happened in Habsheim in northern France in the late 80’s. The brand-new plane crashed after pilots performed low passes they were not qualified for and they hadn’t briefed enough. That led to the airplane full of passengers and journalists to collide with the trees at the end of the runway. The airplane full of fuel quickly caught fire and passengers were evacuated. However, there were 3 deceased passengers that day.