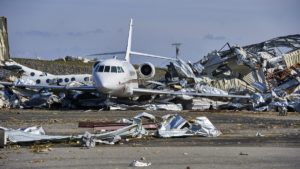 In this picture, we can see a plane standing in the middle of piles of debris from other aircraft. The airport on which these planes are was likely hit by a tornado. At the right of the aircraft on the picture, the debris looks like they are from a former hangar, not an aircraft. This means the tornado was powerful enough to bring a hangar down. We can also see a registration number (N43NC) in the pile of debris, proof of airplane destruction as well.