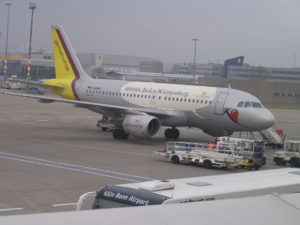 In this picture, we can see a plane on the ground at an airport. The plane is at the center of the photo and belongs to the sadly notorious former airline Germanwings. This is a special painting that is kind of funny. Indeed, the painted a mouth at the front of the plane, which makes the plane look like a leaving something. Right behind the mouth there is a bubble that contains what seems to be an advertisement, written in German. As a matter of fact, this picture has likely been taken at Köln Airport in Germany. Ground vehicles around the aircraft suggest that this happened during a turnaround phase.